As dogs grow and develop, they go through many measurable developmental periods. What happens during each of canine development period can profoundly affect the rest of their lives. It is very important to be aware of the significance of each developmental period because the types of training may differ accordingly.

Ease of learning changes considerably throughout a dog’s development. Just as very young puppies commonly experience difficulties trying to master and remember new obedience instructions, older dogs often show similar severe learning constraints when attempting to change their behavior and temperament. For example, it is much harder to teach an older dog good habits if he has already been allowed to develop bad ones. Moreover, modifying temperament problems becomes progressively more difficult as the dog grows older.

Socialization, temperament, and confidence building are ideally accomplished during puppyhood so, think ahead because prevention of behavior problems is much easier than treating them once they develop.

NEONATAL STAGE
Newborn pups are equipped to do little more than sleep and suckle. Their eyes open soon after 2 weeks and they then begin to move around. They become more aware of their environment and begin to form social relationships with their littermates. These relationships are the harbingers of the social hierarchy of adult dogs.

FIRST FEAR IMPRINT STAGE
Puppies are very impressionable during this period and are sensitive to both positive and negative environmental experiences. It is therefore best to avoid any training that involves harsh scolding, chain corrections, or physical punishment. Negative and painful techniques should be avoided at any age, but extreme caution should be exercised when working with dogs during this period.

Puppies that have negative experiences during the first fear imprint period, will often have lifelong memories of the experience that will often develop into a variety of fear-based behavior problems. Treating these behavior problems will require breaking the fears into manageable pieces and then providing counter conditioning treatment that will hopefully help the pup to begin to associate fearful things more positively. This behavior modification process can be very frustrating and will most often require kindness, patience, and persistence if it is to be successful at all.

OPTIMUM BONDING PERIOD
The optimum bonding period is the time during which a puppy is most impressionable and open to bonding with other dogs and/or people. In the wild, puppies younger than seven weeks typically have limited interaction with other pack members outside of their litter and, of course, their mother. Specifically, physical and social stimulation during the first seven weeks of a dog’s life is of the utmost importance for forming and modifying the dog’s adult temperament.

By seven weeks of age, they are strong and active enough to start interacting with the pack in general. Puppies are best able to form new bonds with beings outside their original family at seven weeks of age. Therefore it is recommended that puppies are placed with their human families at around 7-8 weeks of age.

During this phase of canine development, it is very important to avoid stressful or overwhelming situations. Interactive experiences with humans should be positive and gentle. Avoid forcing the puppy to explore new things. Instead, expose the pup to new things and let him explore them at his own pace.

GENERAL SOCIALIZATION PERIOD
This period is arguably the most critical to canine development. Some researchers believe it to be the most important time of influence in the dog’s behavioral development. Indeed, the period of socialization is critical in terms of its crucial importance in producing a friendly companion dog. After the eyes and ears have opened, the puppy is suddenly overwhelmed with new and intriguing stimuli and experiences, which exert a long-lasting effect on shaping and determining the dog’s future personality and temperament. Dogs who do not receive adequate socialization during the socialization period can sometimes be rehabilitated, but the process can be time-consuming and laborious. Dogs who are not properly socialized have a much greater chance of being aggressive to both humans and other animals.

Basically, in most young animals, the earlier the experience, the more crucial its role in the development of the adult’s future temperament. And so is the case with dogs. Both the magnitude and the permanence of the effects of experience decrease as the puppy grows older. The socialization period actually never ends. When socialization continues, dogs become even more socialized, whereas when socialization is discontinued (e.g., when dogs are kenneled, or not walked regularly), dogs gradually de-socialize until eventually, they may become fearful, asocial, or even antisocial.

If adult dogs are to be expected to amiably socialize with other dogs and people, then especially during the impressionable Critical Period, i.e., as early as possible, puppies should be exposed to a wide variety of sociable and friendly dogs and people. Owners should also take every opportunity to socialize their puppies to as many new and varied situations as possible.

Adequate socialization can be achieved without adding the undue risk of disease exposure by avoiding areas where unknown animals and unvaccinated dogs go and only exposing them to dogs that are known to be healthy and have started on a vaccination schedule. They don’t need to have completed all vaccines. If you wait until all puppy vaccines have been delivered, the puppy will have missed the critical socialization period, and this can hinder your Pet’s canine development. Owners just need to be more careful about who they expose their dog to. Remember, physical illness can most often be treated but behavior illnesses from lack of socialization are difficult if not impossible to treat. Dogs who have behavior issues from lack of socialization are frequently banished to the house or back yard, are re-homed or taken to the pound, or worst of all….euthanized. Proper socialization can mean the difference between life and death for a dog.

The period of socialization and training lasts for the dog’s entire life. Behavior never remains the same, it is always changing — sometimes for the better and sometimes for the worse. No matter how friendly and well behaved your dog, always continue socializing and training —there is always room for improvement. Indeed, a dog may become a delinquent virtually overnight when he collides with adolescence, or he may become irritable or cognitively impaired during old a

ADOLESCENCE PERIOD
Canine adolescence is an abrupt and chaotic, yet extremely lengthy, period of change, starting as early as 18 weeks and sometimes dragging on until three years of age. Characteristically, minor puppy rambunctiousness can begin to look like over the top, major-league unruly behavior — pulling on the leash, jumping up, hyperactivity, demanding barking, and even intolerable household destruction. A puppy’s lack of confidence may suddenly manifest as fearfulness and/or aggression to other dogs or people.

Adolescent problems can most often be handled by intelligent and EARLY puppy training. Even if your adolescent pup remains ideally behaved, continue socializing and training throughout adolescence so that you may further continue to socialize your dog into adulthood and throughout life.

ADULTHOOD
Finally, by about three years of age, most dogs start to achieve the social maturity of adulthood. A dog’s adulthood is the time to reap the benefits of the early puppy socialization you worked so hard on and is a time to sit back and enjoy time with your furry best friend. You will be able to take him most places with you where you can show off his endearing personality, friendly demeanor, and obedient nature. Above all, it’s time to get out and have fun with your dog. 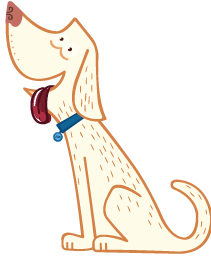 Copyrights © 2021 All Rights Reserved by Hannah The Pet Society.